Little Does Not Mean Boring 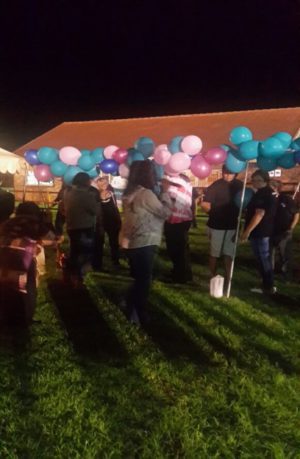 The Teams Having Fun With Their Balloons

Bronkhorstspruit – CANSA Relay For Life Bronkhorstspruit was a small yet intimate event held on 24 February 2017. Outstanding performances entertained the crowd of about 100 throughout the night and they celebrated life by comparing every hour to another day for a cancer survivor.

The CANSA Relay For Life Chairman recited a poem at the Opening Ceremony and this set the atmosphere of joining hands and walking with CANSA in the fight against cancer.

The six survivors present were invited to participate in the Survivors’ Lap but were too self-conscious to get up in front of all the people. Four of the Survivors eventually gained enough courage to brave the lap, in their honour. The crowd cheered them on and carried on cheering when the lap was over to honour the other survivors who could not do the lap.

The Caregiver Lap followed with ten caregivers walking the track while receiving the warm applause from the crowd in appreciation for all they do.

The Luminaria Ceremony was that of dedication as the CANSA Relayers were given time to reflect on the lives of loved ones lost to cancer and those still in treatment. This was also a very special moment for the Survivors as they were able to reflect on their own journeys and how far they had come.

The Closing Ceremony concluded the CANSA Relay For Life Bronkhorstspruit with speeches of appreciation and two of the entertainers ended the event in prayer.