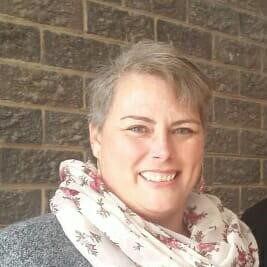 Freda Botha – In November 2008 just after my 34th birthday I began to feel sick. I was battling with my stomach and felt nauseated all the time. On 22 November 2008 it was so bad that I decided to go to my Doctor. He referred me to Provincial Hospital for x-rays and they immediately referred me to Livingstone’s Casualty division. They saw a blockage in my bowel and a bunch of air bubbles.

I was admitted to Livingstone Hospital. After still more x-rays, scans, and blood tests, they decided to operate on 26 November to remove the air bubbles from the bowel. Little did I know how my life would change that day. With the surgery they found a growth and decide it should be removed immediately. I was shocked when I woke up after surgery and I had a stoma bag and I had to hear how it had changed into a large operation. I don’t remember much about the month I had spent in hospital. I just know that if it wasn’t for me becoming ill, they probably wouldn’t have found the growth and things could have turned out very differently for me.

After I was diagnosed, I didn’t really know what to do or expect as I didn’t know where to find info or who to turn to for help. A friend told me about CANSA Relay For Life and in the beginning I was very sceptical about having anything to do with it as my Cancer wasn’t something I wanted to talk about. I felt it was a personal thing and no one would understand.

I agreed to go to a survivor’s function to keep my friend happy and that was a turning point for me. Here I realized how many people was in the same boat as me and that there was an organisation that could help me with what I wanted to know. After my second Relay I decided I wanted to be a part in doing more to help educate and to help raising funds for CANSA.

As a volunteer I have helped at other fundraising initiatives for CANSA and on social media I share as much information as possible. I also tend to tell more friends and family about CANSA and how they can help them and in turn how they can help us in our effort to spread awareness.

I never thought getting cancer would change a person’s life so much. I have changed my view on a few things and feel that seeing that I can’t change what’s happened, but the best I can do is take it one day at a time and make the best of what comes my way.