Cancer can be a Life Saver Rather than a Death Sentence 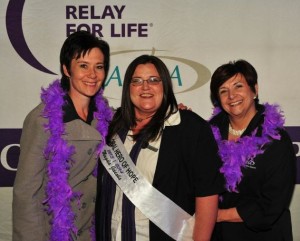 4 September 2013: That cancer means a death sentence is just one of the most prevalent myths that cancer survivors often come across in the workplace. The 3rd annual CANSA  Relay For Life Corporate event takes place at Denel, Irene Campus on 5 & 6 October 2013 and not only honours cancer survivors and caregivers, it’s also a great opportunity for companies to support a colleague who is a cancer survivor.

The theme for the Relay For Life Corporate event is ‘Carnival of Hope’, allowing workplace teams to be creative and get into the ‘colourful’ spirit to show support for work colleagues living with cancer by entering a team.  Corporate teams, as well as those affected by cancer, walk in Relay throughout the night to create awareness of the dreaded disease and recognise cancer survivors with a Survivors ‘victory’ lap, as well as caregivers with a ‘Caregivers’ lap.

When Magda Jacobs discovered that she had brain cancer at the age of 21 and that her prognosis was not promising, she didn’t give up. In fact, throughout the trauma of surgery, radiation therapy and numerous tests, Magda found herself growing stronger and increasingly determined to make a difference in the lives of others affected by the disease.

Now, 12 years later, Magda sees her cancer as the best thing that happened to her. “It opened my eyes to those around me and what I could do to inspire them.” She says this is ironic as her right eye was damaged during her operation and remains closed. Humour plays a large part in Magda’s approach to supporting and counselling other cancer survivors, as well as in dealing with her own situation.

Magda, who was adopted at birth, says that another positive outcome of her illness was that she was forced to find her biological family to get her medical history. “Today I am a richer person because of cancer. I have an extended family and when I look in the mirror and see my closed eye, I realise how privileged I am to be alive.”

After being invited to participate as a survivor at one of the CANSA Relay For Life events a few years ago, Magda realised she had found ‘the beginning of something big’ for herself.

“Never in my life have I experienced such a feeling of self-worth,” she says. “I felt so special and was reminded that there are people who care and that I am not alone. Who’d have thought that cancer could affect so many people, including at the workplace? All of a sudden I realised that I am a survivor. I survived brain cancer and I am here today to celebrate my life, to remember those who lost the fight and to encourage other survivors to fight back because I am proof that cancer can be beaten.”

A Global Relay For Life ‘Hero of Hope’

That Relay event inspired Magda to become involved in spreading a message of hope to cancer survivors and she was recently awarded a 2013 Global Relay For Life ‘Hero of Hope’. South Africa is one of 23 countries that raise funds and awareness for the fight against cancer as part of Relay For Life which has a network of Global ‘Heroes of Hope’ who share their story and help inspire other people from the community who have been affected by cancer.

“As a ‘Hero of Hope’ and ambassador for CANSA, I encourage participation in Relay events, share my cancer journey and message of hope while spreading awareness about CANSA’s care and support programmes,” concludes Magda.

About CANSA All funds raised at the CANSA Relay For Life is allocated to the unique integrated service provided to the public and all people affected by cancer. As a leading role player in cancer research (more than R6 million spent annually), the scientific findings and knowledge gained from our research are used to realign our health programmes as well as strengthen our watchdog role to the greater benefit of the public.

Our wide-reaching health programme comprises prevention and education campaigns; more than 30 CANSA Care Centres that offer stoma support and lymphoedema management; medical equipment hire; a toll-free line and support to those affected by cancer; patient care and support in the form of 12 CANSA Care Homes in the main metropolitan areas for out-of-town cancer patients plus one hospitium based in Polokwane, as well as CANSA-TLC lodging for parents and guardians of children undergoing cancer treatment.