Mr Jacques Prinsloo, a local businessman from Rustenburg, decided he wanted to do something extraordinary for CANSA Relay For Life Rustenburg to show his commitment to and passion for CANSA survivors and show them that he truly believes that cancer never slumbers nor sleeps. 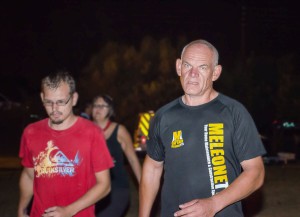 After much consideration, the 50-year-old Jacques, a speed walking champion in his youth, decided to walk 83km around the track in twelve hours at CANSA Relay For Life Rustenburg. An astounding 240 times around the track!

Why 83km: “CANSA & Cancer is very important to me and I have been personally affected by cancer through family members & friends that had to fight this horrid disease. Some of them lost their battles and I watched others fight when they had nothing more to fight with. I wanted to show my commitment to these cancer Survivors, but also to CANSA. So I decided to commemorate CANSA’s 83 years in existence with the 83km,” answered Jacques, who honours CANSA every day by wearing CANSA’s logo on his shirtsleeve while working.

Shortly before CANSA Relay For Life Rustenburg Jacques broke his toe but this did not deter him. With a team behind him armed with lots of painkillers and plasters, he walked the distance of the 83km in the time of 12 hours!

“I am so glad I completed the 83km in time, but now am sore all over and I’m tired to the bone” Jacques said after the Relay, “I have three huge blisters on my feet but the best of all is the smile on my face! I cannot for the life of me describe the feelings inside of me. I once again was humbled by the realisation that our God is mightier, more compassionate, more loving, more powerful than we realise.” 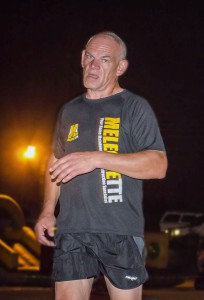 Jacques concluded, “When the Survivors and the fighters came past on their lap, and when the Luminaria candles were lit, I got this huge lump in my throat, my eyes teared up and I had no control over those emotions. This challenge of mine I did for some of my dearest friends and I wish to salute you. All I can say is ‘Stay strong, believe, trust and pray.’”

Jacques will be entering a team into CANSA Relay For Life Corporate in Pretoria in September and will be taking up this challenge again!

Please go and support Jacques’ attempt to walk 83km again in only 12 hours at the CANSA Relay For Life Corporate 2015.

We salute you Jacques!