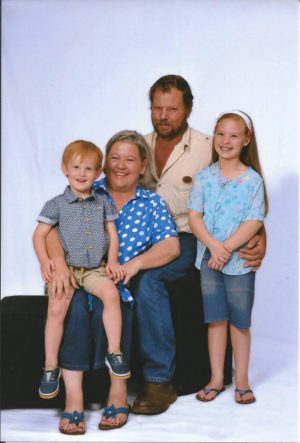 Tania Naude and her family

Tania Naude has been a breast cancer survivor for 14 years. Born in 1966, she grew up in South Africa’s arid and semi-desert region, the Karoo. Being the third of four children Tania had a relatively happy childhood. Unfortunately, she learned very early on that there are very few constants in life, loved ones come and go: those closest to us can hurt us the most; and that empathy and kindness can often come from complete strangers.

Religion was a chaotic subject in Tania’s life, having a Catholic mother and a Dutch Reformed father. In 1984, she found her own way at a spiritual retreat and Psalm 16:5-6 became her life’s mission statement: ‘Lord, You alone are my portion and my cup; You make my lot secure; the boundary lines for me in pleasant places; surely I have a delightful inheritance.’

In 1992, Tania married her husband, Martin. After unsuccessfully trying to fall pregnant at age 32, the couple established a philosophy that if it is meant to be, it will happen; if not, something else is due to come along.  They were not a couple that to sit and mope, so Martin bought them quad bikes and they became weekend quad bike junkies.

At 36 years, with a helmet on her head, Tania was not overly happy but she was content. Tania discovered a lump in her breast, which did not concern her very much as she had them before and they turned out to be ordinary cysts. Tests revealed that Tania’s helmet would have to be shelved for a while.

She also learned that a one-cup bra was not yet designed; that she hated wigs; that without a covering, a bald head it becomes rather chilly; and that chemotherapy and radiation is like waging war. 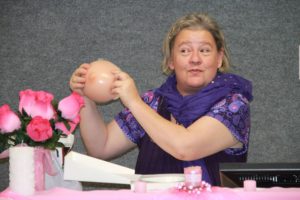 On the up side she also learned that hair grows back; prosthesis can provide a semblance of reality; laughter is free; and once again, that strangers can become lifelong friends.

“CANSA became a place of refuge. The people who work there closely resemble my beloved Karoo people, imbued with kindness and hospitality,” says Tania.

Post cancer Tania started spending her weekends riding her quad bike again. She started feeling very tired again and could not get through the day without a midday nap. She went to see her doctor with much trepidation. After a 15-year childless marriage, a sonar confirmed that she was 16 weeks pregnant.

At only 36 weeks, Helen Hester (meaning ‘light’ and ‘star’) was born on 9 March 2007. Although there were complications at birth, Tania never doubted her baby’s survival.

The re-occurrence of breast cancer the following year was not as aggressive as the first time and by now Tania knew the drill. She endured the chemotherapy and the side effects seemed easier to handle when she had Helen around.

“Why do some of us survive cancer when so many don’t?” Tania’s question remains unanswered.

After adopting a two-year old boy two years ago, the couple was often told they were crazy as 50 was approaching fast. Tania’s response is, “We are not crazy. We are just firm believers in travelling the road assigned to us – If you look closely, even if the Karoo looks dry and barren to you now, you should see it after the rainy season. “