BRITS – A small CANSA Relay For Life took place in September 2016 with 600 community members attending.  The teams brought very creative signs to support and celebrate the 23 cancer survivors, who were invited as VIP Guests. 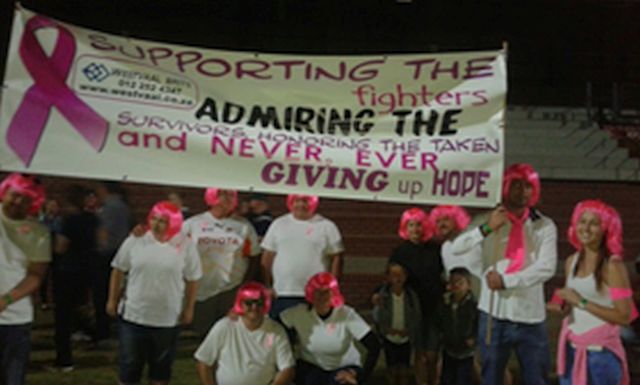 The atmosphere at this CANSA Relay For Life Brits was one of unity in the fight against cancer and the community committed to staying through the night.

Being a novice CANSA Relay For Life, the overall reception was that of a promising future. During the Survivors’ Lap, everybody was in awe by the song ‘Take My Hand’, and the 20 teams supported the survivors as they walked past them.

The Caregivers’ Lap followed, to recognize the important role that caregivers play in the lives of cancer survivors.

During the Luminaria Ceremony, the CANSA Relayers stood at their luminaria bags with lit candles to commemorate those who lost the fight against cancer. This was a major highlight at the CANSA Relay For Life Brits as many identified with a loved one they have lost. Every single person took the moment of silence to heart. The remarkable understanding that everyone showed for this ceremony paved a way for the unity that many could use as a means of remembering and healing from the losses they had encountered in the past.

The night was filled with entertainment and the Fight Back Ceremony was interactive and fun, taking the form of CANSA Relay Recess and the children brought the message to life.

The event left cancer survivors feeling inspired, and at the closing ceremony teams and individuals were recognised and awarded.

The CANSA Relay For Life mission was accomplished in this small and intimate event and next year’s event is set to be an even greater success.

Well done to the CANSA Relay For Life Brits committee.