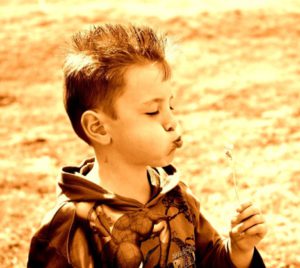 His parents, devastated by the news, braced themselves for a long road ahead as his oncologist explained the duration and the treatment plan. Joshua was aware that he would not be able to attend school for a couple of months and after his mother explained the disease to him, he answered, “Let’s fight it.”

Joshua was positive from the beginning, but two weeks into the treatment, their laughter and hopes became clouded. It felt as if their world had ended. Joshua contracted chickenpox but the symptoms never presented as normal chicken pox. His body was encrusted with millions of blisters, which looked like severe sunburn that developed into blisters. After a skin biopsy, they discovered that he had chicken pox. 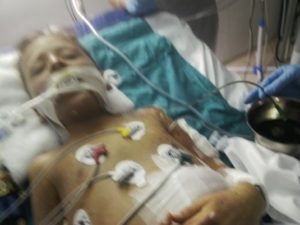 Joshua’s system started to shut down from the combination of the chicken pox virus and the prednisone, used in his treatment for leukemia. Joshua was incubated on 18 October 2013 and was given 48 hours to live, with no promises. However, little Joshua fought like a true warrior and pulled through.

His body was encrusted with blisters resembling those of a burn victim and the days that followed were a nightmare. They were not able to treat the leukemia due to all of the extra complications with his organs. Over the following 68 days in the Intensive Care Unit Joshua fought everything thrown his way. 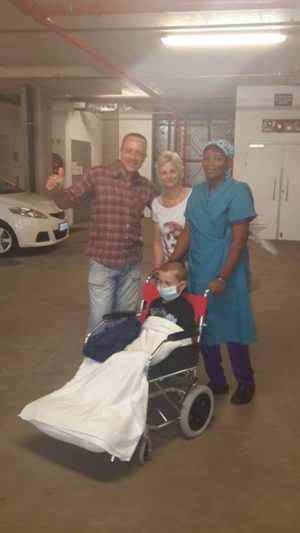 From lung infection, renal failure, sepsis, septic shock, a stroke that affected his right side, encephalitis, seizures, to his gut swelling to 108cm, Joshua never gave up. Medically he should not have survived. The doctors never gave much hope as they administered 30 different antibiotics and over R450 000 worth of blood transfusions and platelets. Through the power of prayer, the will to live and support from family and friends; as well the amazing nursing staff and the doctors, and people that they had never even met before; Joshua pulled through, once again.

Joshua has fought a very hard battle and continues to fight, surprising the medical team at each turn. Joshua was discharged from hospital on 24 December. He could not walk and the only words he could say was ‘Thank you’ and ‘Mom’.

Joshua was admitted to hospital once again on 31 December, for a bone marrow test; lumber punch; and he also had a chemo port inserted. His family was very anxious, as they did not know if Joshua’s lungs would cope with the anesthetic. He was very weak and weighed only 20kg.

A week later, they celebrated as they were given the good news that Joshua was in remission. Joshua had to continue chemotherapy to keep the cancer at bay and the rehabilitation, resulting from of all of the other complications he endured, was a slow process. While he learned to walk and talk again, Joshua never showed any negativity. As his vocabulary list doubled, over and over again, he learnt to walk with very stiff legs. 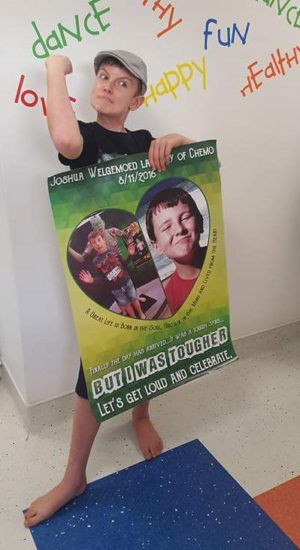 During his time in ICU, Joshua was resuscitated more than five times and the encephalitis caused damage to parts of his brain, which caused memory loss. His parents were told he had 24 or 48, or fewer hours to live, five times. Their emotions were indescribable and they told him repeatedly, “God gave you to us to look after and the only place that you are going is home with Mommy and Daddy.”

Joshua’s recovery has been a long road and each day sees progress. He had to learn how to do everything that most people take for granted, over again. He has seizures, which caused havoc over the last three years, but with an amazing neurologist, the seizures are getting less every month.  “We are very proud of Joshua’s incredible strength, his pure determination and fighting spirit. The last three years has been a challenge but he still stands strong,” added Joshua’s mother.

In November 2016, Joshua was given the all clear and kicked leukemia’s butt!