My Relay in Memory & Celebration of Antoinette 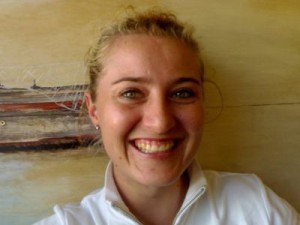 Yvette van der Walt writes: I recently participated in CANSA’s Corporate Relay For Life Event in memory of my very dear friend, Antoinette Oberholzer, and to celebrate her life – I gave a speech about her at the prizegiving which I would like to share with you in the hope that it will encourage you, as Antoinette encouraged me. (We lost Antoinette, at the age of 29, after a 7 year battle with breast cancer, in March 2013).

Chemo Instead of a Honeymoon

Anti was diagnosed with breast cancer in 2006 – after chemo and surgery, she was in remission for about 3 years. In June 2010, she and her husband Brendan were married. Shortly before the wedding she began to feel ill again. Instead of going away on honeymoon, Anti went for chemo and radiation the Monday following her wedding day, because the cancer had returned and had spread to her lungs.

The cancer continued to spread to her liver, brainstem and back – and as a result of the damage to her neck vertebrae caused by radiation, she was paralysed for the last year of her life.

Anti promised Brendan that she would fight to the end and she continued with treatment despite her doctors telling her that she was terminal and that the treatment would no longer be effective. She even convinced her medical aid to pay for experimental medicine from overseas, because she believed that she should fight to the end and that her purpose on earth had not yet been fulfilled. She stupefied her doctors time after time and she got so many people to believe in miracles again.

Although Anti was trapped between four walls, flat on her back…with bed sores, oxygen tank, catheter, constipation, nausea and unimaginable pain – where others would have given up long ago, she continued to fight and did not allow her circumstances to get the better of her.

She still took every opportunity to help and support others through prayer, love and support, even though she was suffering.

We raised funds and received a sponsorship for Brendan & Anti’s accommodation, so that they could go on honeymoon and that Anti could see the ocean one last time.

She took full advantage of every opportunity to get the most out of life, before she had to leave – once she went swimming, wheelchair and all! We constantly held picnics on her bed and two weeks before her death, we pushed her hospital bed out into the sunshine and took some “fun” photos together, not realising that these would be the last photos together with her.

An Inspiration to Others

Anti visited the actor, Ivan Botha, a few weeks before she passed away and she inspired him tremendously, especially seeing as his upcoming movie “Pad na jou hart”, told the story of a terminally ill woman.

She was baptised in hospital, her family standing around her bed.

Anti always showed such compassion for others and always had time to encourage them and to show them she cared. We all tend to talk about ourselves and are given over to self-pity, but Anti NEVER was – she would rather ask how we were doing, despite the difficulties she was facing.

After Anti passed away, the messages streamed in on Facebook and to Brendan. Even people who did not know her personally and other cancer patients who she met while waiting in line for chemo, were inspired by her.

Antoinette Inspired me to Participate in Relay For Life

Antionette was such a brave woman and I can write a book about the battle she fought. She amazed everyone with her courage and will to survive, up until the very end. Even when they said we should say good bye she decided that she had unfinished business and that she was not ready to go – she was discharged from hospital, sorted out her unfinished business and was only admitted to hospital again two weeks later!

Her pastor was standing next to her bed and in a moment of chaos while the nurses were trying to get her hooked to an IV and to get her fever down, they turned her towards her pastor who was holding her hand and she asked him, “How would I know when I’m ready to go?”

Her pastor lost his own father earlier that same day, but when he heard that Antionette was being admitted he was moved to go to her despite his own circumstances. When Antionette asked him that question he knew why he was summoned… to tell her that she was ready and that God was waiting for her.  God knew her strong will to live and that she would keep fighting until He told her it was over.

She changed so many lives and taught me so many lessons. If I could give someone just a grain of the hope and will to survive that Antionette had it could make such a difference and that was the drive behind my Relay campaign.

I also learnt that there are days when a cancer patient, their friends and caregivers lose their ability to encourage and that is when they need what I used to call: “fresh” hope. “Fresh“ hope is the kind of hope you get from an outsider, someone who has not been beaten down by chemo and radiation and bad news and seeing their loved one suffer. Someone walking right through the night in support of those fighting cancer; someone shaking a can and putting on a silly hat to raise funds to find a cure, someone who stands around a field clapping and cheering for you to show that you matter and that they care. That is what the Relay meant to me…

I walked the Caregiver Lap with Antoinette’s husband, Brendan, and I could see the “fresh” hope in his eyes and the way his shoulders lifted a bit as he got recognition and acknowledgement for the hero he is. Even though his wife was taken away, he was encouraged to go on and make a difference in other people’s lives and that made the Relay extra special.  It was truly a life changing experience that I cannot explain to anyone who wasn’t there; I would definitely do it again if I can…

2 May 2022 | PUBLISHED UNDER: CANSA Relay For Life News, Stories of Hope