“Men can’t get breast cancer, or can they?” 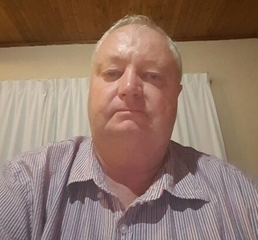 While bathing one evening in 2006, Bobby felt a pea sized lump next to his right nipple. After further investigation his wife insisted he should go and see the doctor. Bobby, being stubborn, told his wife that it was nothing and ignored the lump.

About six months later he went to the doctor for a routine check-up and showed the doctor the painless lump. The doctor immediately referred him to a surgeon. Again Bobby was stubborn and thought that it was a waste of money.

Bobby still told himself that it was nothing and was a little angry with the doctor. He thought to himself that the doctor hadn’t even touched it or examined the little lump. ‘The fact that the nipple was inverted and the orange peel symptom did not mean that he had cancer. Who was this lady doctor telling him, a man, that he had breast cancer? How ridiculous was that, men don’t even have breasts?’ he thought.  The doctor immediately referred him to a surgeon again.

Bobby could only make an appointment with the surgeon in January the following year. While waiting for the appointment Bobby convinced himself that everybody was making a huge mistake, he could not have breast cancer. Bobby’s grandfather died at a very old age from prostate cancer and his father had passed away at 35 from lung cancer. Both were smokers and Bobby argued that he had never touched a cigarette in his life. Everybody was wrong.

After consulting with the surgeon, who wanted to operate the next day, Bobby was still in denial. The surgeon told him that they would take a sample to send for testing and if the result was positive, they would have to screen the lymph nodes under his arm as well. When Bobby awoke from surgery, he felt one drain and then the second. He knew what the result was. Bobby had breast cancer and had had a mastectomy.

After the stitches came out, it was time to see the oncologist. Bobby thought that this would be easy and he could just take pills and be on his way, but the oncologist had another plan. A chemo port was inserted and Bobby, accompanied by his sister, went for his first chemotherapy treatment.

Fourteen days after the first chemo, Bobby woke up and found his pillow covered with his hair. He took out more clumps while washing his hair. He decided to shave off what hair he had left. Bobby saw the strange reflection in the mirror. Him with no hair, coupled with the dent in his chest and the scar. He felt horrified looking at his own reflection.

Five years of tablets were prescribed after the chemotherapy and radiation was completed, which resulted in hot flushes. “This and the annual mammograms has given me huge respect for my female counterparts,” Bobby said. “Despite all of what has happened, I believe that my journey with cancer has been one of the greatest blessings in my life.”