ESTCOURT – At South Africa’s 24 hour CANSA Relay For Life, 50 cancer survivors were honoured and celebrated. Two thousand community members and businesses united at this diverse and awe inspiring eighth CANSA Relay For Life Estcourt event. The committee chairperson gave an inspirational opening speech before the survivors walked onto the track as proud VIP’s at the event.

CANSA Relay For Life Estcourt was well supported by the immense crowd consisting of various ethnic groups and lively entertainment. that kept the crowd motivated over-night. Sponsors joined in on the festivities and marched alongside the survivors and supporters. All 36 teams watched as the proud cancer survivors and caregivers walked the track. CANSA offered free services, which ranged from breast examinations, Fotofinder testing, PSA tests to Lifestyle Risk Assessments.

The Caregivers’ Lap added to the atmosphere of gratitude for these individuals who care and support the survivors, along with their families. The community showed their respect to these caregivers and the important role that they have come to play to each and every one of them. 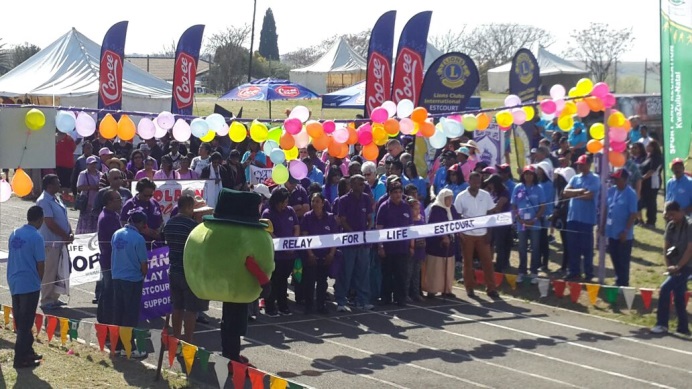 CANSA staff and the CANSA Relay For Life committee aimed to spread the message of uniting against the fight against cancer across the community and many have committed to taking that beacon with them where they go.

Teams were proudly represented on the track with banners throughout the event, and during the fight back ceremony their commitment was emphasised with posters and active participation on the track. There was no doubt that this community was fighting back and going all the way in the fight against cancer.

After 24 hours, it was evident by people’s expressions that most of them were exhausted, but everyone united for a last time to close the event, with most of the survivors still present.

The highlight of the event was the thorough commitment and availability of the committee members throughout the event as they supported and guided all participants at the venue, which aided in making the event a success.  The overall general impact of the CANSA Relay For Life Estcourt was to enhance the need to diversify the representation of those who will advance the message that CANSA is aiming to convey. With the support from various sponsors and community members, a footprint has definitely made.