Flame of Hope handed over

ROBERTSON – CANSA Relay For Life Langeberg celebrated their 7th year with 62 survivors, the most cancer survivors thus far who came to celebrate life and commemorate their own fight against cancer, with the community.

Community members from Robertson, Ashton and Bonnievale came out to participate in this year’s CANSA Relay For Life. The committee gave a lot of attention to detail, as the programme moved smoothly from the Opening Ceremony to the Closing Ceremony the following morning.

The Survivors’ Lap highlighted the event when the youngest and the oldest survivor walked around the track carrying the Flame of Hope. They were followed by the other survivors, as the teams and the community applauded and cheered at their bravery and confidence.

The caregivers were honoured with a banner displaying the words, ‘Caregivers walk the extra mile´ leading the Caregiver Lap. This left a definite sense of gratitude which the communities have towards the roles they play in every cancer survivor’s journey. 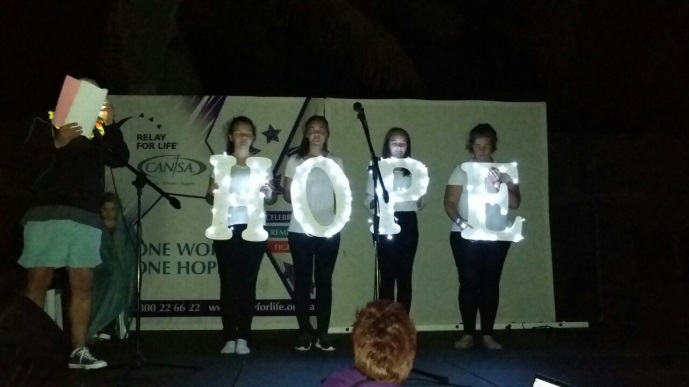 During the Luminaria Ceremony, the chairperson read the” Empty Table” poem. Scholars from the local high school held the lit letters H-O-P-E, while the meaning of the word was shared with the CANSA Relayers.

An emotional and moving Luminaria Ceremony followed with a reel showing the faces of those who had lost the fight against cancer. The CANSA Relayers completed a lap in silence with their lit luminaria bags.

The 23 teams had an army theme for the Fight Back Ceremony. The MC was the drill sergeant and ordered them to stand in line. The battle troops echoed out lines and they promised to continue the fight against cancer. All of the CANSA Relayers understood this message loud and clear.

The CANSA Relay For Life teams were treated to a well-planned programme of events throughout the night and the Closing Ceremony left the communities thankful to all of those who planned and executed this amazing experience.