The CANSA Relay For Life Caledon’s Committee members took the Relay For Life slogan, ‘Paint your world purple’ literally when they walked on stage quipped with paint brushes and paint cans. The committee members placed these on the stage to symbolise the slogan at the opening of the event on 18 February 2017. 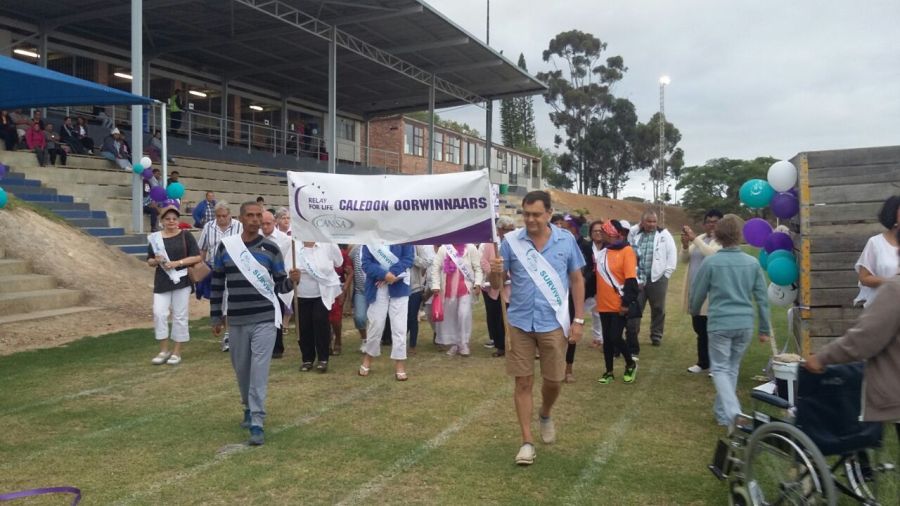 Survivors’Lap at the CANSA Relay For Life Caledon

An inspiring survivor story from Rachel Olivier’s daughter followed and set the mood for the event, as everyone took a moment to reflect on how the Olivier family’s lives were impacted by cancer, as well as their own.

Mrs. SA finalist, Shelly Loots cut the ribbon to open the Survivors’ Lap. As the 22 Survivors walked the lap, the crowd formed a line of honour around the track and applauded them. The Caregiver Lap followed and the CANSA Relay For Life Caledon Liaison Committee were asked to join the caregivers for their lap of appreciation.

The candles were placed and lit in the Luminaria bags while Josh Groban’s song ‘To where you are’ played to the darkened arena to begin the Luminaria Ceremony. Liezel Kimber, CANSA Relay For Life Caledon committee member, shared a very touching testimony and everyone reflected on those who lost the fight against cancer over the past year.

Eager CANSA Relayers learnt a survivor song during the Fight Back Ceremony and CANSA’s Mission Delivery posters were displayed all around the track.

The chairperson thanked the 19 teams and the 450 audience members for their participation at the Closing Ceremony.