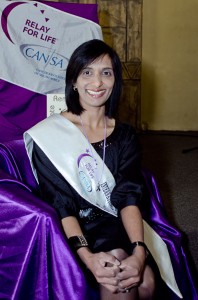 She will never forget the day in December 2002 when her twins graduated from preschool; not just because it was an important milestone in their lives, but because it was also the day that she discovered a lump in her breast. ‘The news that I had cancer was shattering,’ she says. ‘When you are a nursing sister you don’t ever imagine being a patient yourself, having to be nursed by your colleagues. I was disbelieving, angry and afraid at first. I was only 33, with my life ahead of me – I had a husband, a nine-year-old and two five-year-olds.’ Like others diagnosed with cancer, Rita had to experience and work through all the classic emotional stages before she finally reached acceptance and came to terms with the fact that she had cancer.

‘It was a long, hard road but I came through with the love and support of my family and friends,’ she says. ‘My husband was extraordinary from day one: he played a crucial role in helping me adjust after I had the mastectomy.  It has been nine years now; years that have been healty and productive.’

Read the Mercury article on Rita: “Nurse who beat cancer is hailed by colleagues”