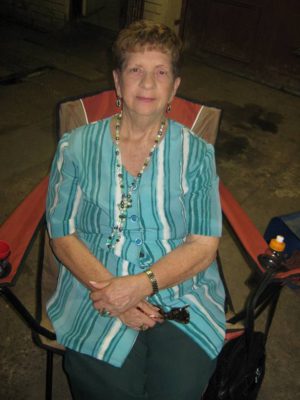 81 Year old, Irene Scholtz had a small mole on the left side of her foot and it started irritating her at night. Small little black dots started forming in the middle of the mole. Irene thought nothing of this at first, but then it started having a pins and needle sensation. She went to see her doctor who suggested that the mole be removed and be tested.

The results revealed that it was a melanoma and Irene underwent another operation to remove the roots of the mole.

About two years later, Irene had developed cataracts and went for an eye test. The doctor noticed that there was a mole on her eyelid while doing the test. He removed the mole and the test came back as melanoma again.

While in the process of radiation treatment for this melanoma, the doctor discovered a carcinoma and another melanoma between Irene’s eye and nose, which were surgically removed as well.

As a result of the radiation treatment, Irene lost her eyelashes and they never grew back after the treatment. Irene’s eye was constantly red and watery because there were no lashes to prevent dust from going into her eye. She is on permanent treatment for her dry eye and has to wear sunglasses in and outside of her home.

The radiation treatment also formed a hole at the back of her eye and the fluid in her eye was draining through it. Irene had to go for a laser eye operation to seal the hole and oil was used to fill the hole. She had to sleep in an upright position for two weeks to keep the oil in place.

Irene’s vision became blurry after a month and she had trouble seeing and focusing. She underwent laser treatment on both of her eyes.

There was no sign of cancer when Irene went for checkup in April 2016.

At the beginning of 2017, Irene noticed a mole on the inside of her left arm which was irritated and swollen . She went back to the doctor immediately and once again had the mole removed. The result was melanoma again.  Fortunately this time, Irene did not have to undergo radiation treatment again because the cancer was found early enough. Irene is scheduled to have another checkup in June 2017.

“I have participated in CANSA Relay For Life Klerksdorp since 2009 and I am proud to be a Survivor and it is an honour to be part of the Survivors’ Ceremony. I live a full life and thank God for His Grace,” says Irene.